Afro-germans and their role in Nazi-Germany

Most of the light-skinned blacks who lived in Germany during the Third Reich were of mixed blood. Many of them were children of French and African occupying soldiers and German women in the Rhineland.

Black visitors who settled in Germany became the first Afro-Germans, and their children, especially those with either white parents or both, were the first generation of people of color born in Germany.

The interracial relationships between German women in the Rhineland and Senegalese women and other African soldiers in the French army led to the birth of several hundred mixed-race Afro-German children. In Nazi Germany, the derogatory term “Rhineland bastard” was used to describe children of Franco-African occupying soldiers and German women in Rhineland. The existence of these children remained well known, and they were even mentioned in Hitler’s book Mein Kampf. 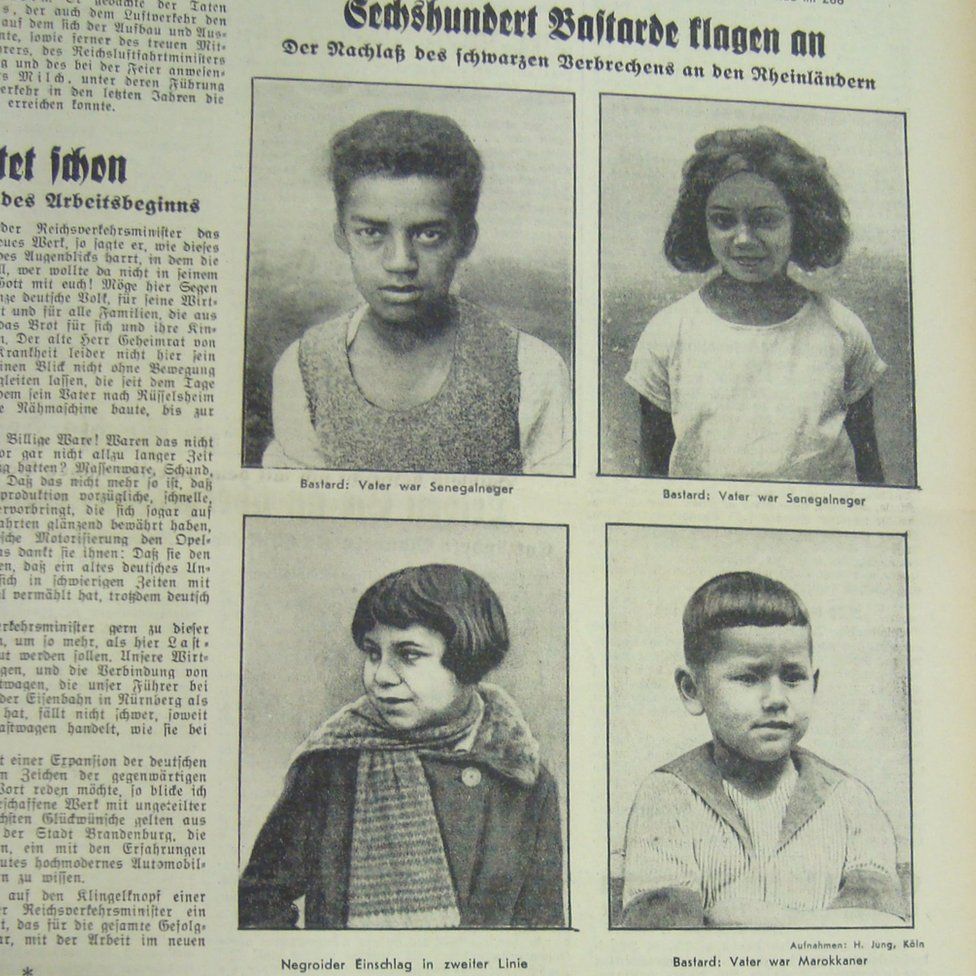 Segregated from the start

The deployment of French colonial troops and black occupying troops reinforced racism against blacks in Germany. British, American and German journalists and activists used for their racist propaganda interracial relations between German women in Rhineland and Senegalese or other African soldiers of the French army. They made films such as Black Horror on the Rhine and posters depicting black soldiers as rapists, threats to white women’s purity and carriers of deadly venereal diseases.

Although the children from Rhineland belonged to the first generation of people of color born in Germany, they grew up relatively isolated, surrounded by white families and neighbors and were rarely a visible part of local family life.

When Hitler came to power, one of his first directives was against the Rhenish bastards. Emphasizing his obsession with racial purity, Hitler identified in 1937 that all mixed-race children in the country should be sterilized to prevent what he called “further racial contamination.”. It was left to Hitler’s racial state to take action against the country.

Many of them were rounded up and sterilized by the Gestapo.

The Nazis established a secret group, Commission No. 3, to organize the sterilization of offspring in order to preserve the purity of the Aryan race. In 1937, municipalities throughout Germany submitted lists of children of African descent. Many of these people were not fluent in German-speaking Berlin dialects

During this period, many black people who lived under the Nazi regime in Germany were persecuted, alienated and murdered. African and German mixed-race children were marginalized in German society and were not allowed to attend university. Nazi propaganda posters showed no friendship between racial groups and referred to the loss of racial pride.

When the Nazis came to power, African German mulatto children became the target of racist population policies. They were economically and socially marginalized in German society, socially isolated and were not allowed to attend university. Racial discrimination prohibited them from seeking most jobs, including military service.

The NSDAP passed the highly controversial Nuremberg Laws in 1935, which prohibited marriage between Germans and Jews. A major question brought into the debate was whether mixed-race children born from such marriages who hold German citizenship and return with the same voting rights to Germany could serve in the military and hold public offices as thoroughbred Germans. A few years later, the Nazis changed the laws to include Roma and blacks in their marriage relationships, but the ban was still in place.

During the First World War, French occupation forces included African colonial troops in the Rhineland who had children with German women. In the region, local opinion of these soldiers varied widely; they were described as polite and popular French colonial soldiers who harbored no malevolent Germans and were war-weary French occupiers.

During Hitler’s rule, there were between 20,000 to 25,000 blacks in Nazi Germany and when asked about Blacks in the Third Reich, the Germans are most likely to talk about Africa. A deeper look shows that the proto-Nazi ideology of the German Third Reich encompassed a vast network of Nazi-era strategies and that Hitler’s postwar legacy influenced Africans, Afro-Germans and African-Americans throughout the 20th century.

Not the only victims

The understanding of the German Reich and Holocaust is also important for other communities including, Eastern Europeans, people with disabilities, homosexuals, Jehovah’s Witnesses and many other groups besides Joyclub Jews. The fate of black victims of Hitler, African-German and African-American soldiers and citizens is often overlooked in studies of the Second World War. However, these points are well known to many scholars and can be associated to form a clear historical nexus between the Holocaust and the African-American community.

Despite such ostracism in the course of history, contemporary Afro-Germans – people of African descent in Germany – have used their agency to overcome the restrictive image of their experiences in Nazi Germany and their general situation in Germany through organizations such as the Initiative of the Black German Cultural Society, the Initiative Schwarze Menschen Deutschland für Schwarze Menschen in Deutschland, the Arbeitsgemeinschaft zur Erforschung des schwarze Erbes (ADEFRA) and Black Women’s Advocacy Organization. There is, however, much more to be learned about Nazism and research into Nazi racial politics, especially with regard to Afro-Germans. The deliberate emptiness of the state-sanctioned racial discourse in Germany and the legacy of Nazi era ignore the historical remains and current manifestations of systemic racism against Afros and Germans, which is anchored in all aspects of German society.

A new film is to shed light on the secret mission of the Nazis to sterilize hundreds of Afro-German children. It is a little-known part of the Holocaust story, but Mo Abudu, the head of the Nigerian media network Ebony life TV, read an online article written by Rosenhaft about the plight of these children. Based on the scant autobiography of an Afro-German survivor, the script follows the relationship of a fictional mixed couple living in Nazi Germany and their struggle to save their children.